Varys is Secretly a Targaryen

Varys is one of Game of Throne’s most mysterious characters, and even as he continues to play a leading role in the TV show, we’re always learning about new elements of his character. Well one theory doing the rounds is that Varys is a Targaryen and that he secretly shaves his head so people can’t see his silver hair. Let’s review all the evidence that suggests this theory is true in an in-depth analysis of Varys being a Targaryen.

To begin with, the show thoroughly explains how Varys became a eunuch in his childhood. Listen to Varys himself as he tells the story. He says,

“A sorcerer gave me a potion that made me powerless, unable to speak or move. Yet, he did nothing to
dull my senses as he sliced me root and stem with a hooked blade, chanting all the while. He threw my parts into a brazier and the fire turned blue. I heard a voice answer his call.”

This scene reveals that other priests use blood magic in a similar way to Melisandre, but Melisandre only believes in its power with king’s blood. Could it be that Varys has Targaryen roots in his blood and that’s why the priest needed his blood to burn? Why else else would someone go through all that hassle with an ordinary orphan?

Varys is an Orphan

Up next there’s the fact that Varys is an orphan in the first place. It isn’t uncommon for nobles to give away their bastards at birth. If Varys was actually a blackfyre, with Targaryen lineage, it would explain why Magister Illyrio is seen working with Varys in the books. In fact, Illyrio is the man who harbors Daenerys and Viserys when they are exiled, so if he knows the truth of Varys heritage, he may have wanted to become allies with the spider for his sheer fondness of the Targaryens.

The hint from Season 3

Moving on, the next detail is slightly subtle, but can be pretty revealing depending on how you interpret it. A scene from season 3 which includes Varys and Tyrion, takes place in the red keep. Varys stares into a foggy mirror in a perfectly clean room at which point the perspective is switched and focused in on Varys as he looks into it. It’s almost as if the fog is surrounding his face like it’s outlining his silver hair. The camera stays fixated on the mirror for an abnormally long time and could this be foreshadowing that Varys is a Targaryen? Who knows for sure, but if you ask me, it’s awfully convincing. 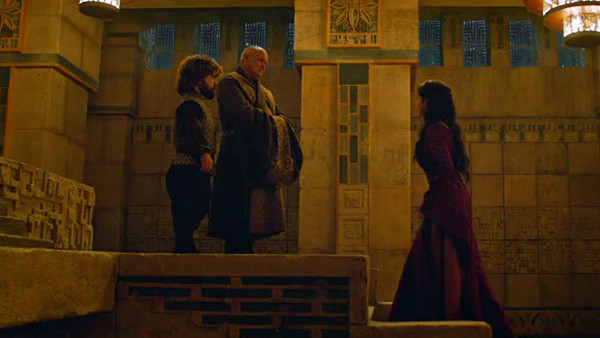 Last up, there’s yet another clip about Varys being cut that aired from season 6. In a conversation with a red priestess, Varys is told, “Do you remember what you heard that night, when the sorcerer tossed your parts in the fire? You heard a voice call out from the flames, do you remember? Should I tell you what the voice said? Should I tell you the name of the voice that spoke?” To me, it seems awfully unusual that the show is paying such high attention to Varys being cut. And even the fact that the red priestess knows about a random orphan being cut is intriguing. If he didn’t have kings blood, and the event wasn’t of much importance, how would she know of him being cut and if wasn’t setting up for a future reveal, why did the show even feature this scene?

In recap, a multitude of scenes and references in the show have hinted at Varys being a secret Targaryen. Whether or not it will be revealed is beyond my knowledge, but I can say with certainty, it seems convincing. Thank you for reading the theory and subscribe to my YouTube channel “House McFarlin” for more videos similar to this.

Do let us know what you think about this theory in the comments.

Stay updated with the latest Game of Thrones fan theories around the world!
34shares