Game of Thrones Season 4 continuity error may have an explanation

We all know by now that Melisandre is quite old and according to many fans, the necklace plays an important role in concealing her real age. 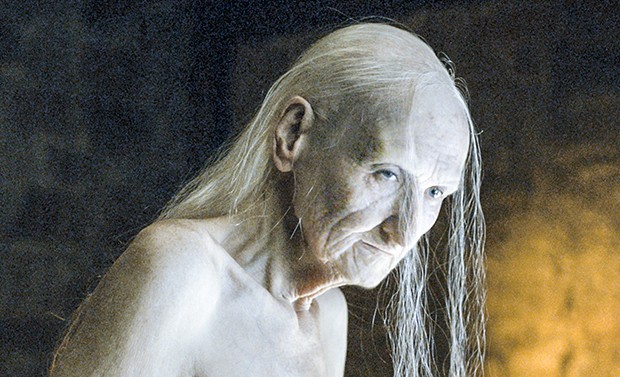 But some fans have pointed out a flaw in this theory – a scene from Season 4 that shows Melisandre as young as she has been shown all throughout the Game of Thrones TV Series but without her ruby necklace.

So, was it a continuity error?

According to one of the theories, Selyse knew about Melisandre’s age and she saw her without her glamor while the viewers were shown her younger version.

In the scene, Melisandre is shown taking a bath in front of Selyse Baratheon – a pious follower of Melisandre and the Lord of Light. Selyse acts all uncomfortable when she sees her. She keeps on looking at her body and listening to her speech about deception. Many fans suggest that Selyse was seeing the true form of Melisandre, owing to her uncomfortable reactions. Moreoever, at one point Melisandre tells her:

Alternatively, another theory suggests that Melisandre puts a potion in the water which might be the reason why she looks young.

Well, we are not really sure whether it was a mistake on the part of the show runners or Selyse actually saw Melisandre’s true form but there are 3 things that point towards the fact that Selyse knew everything about Melisandre:

In an interview in 2012, Carice van Houten suggested that her character was “over 100 years” old. This could mean that the show runners were aware about this twist from a very long time.

In HBO’s “Inside the Episode,” show runner David Benioff said,

“There have been a few hints before that Melisandre is much older than she appears. Going back to a very early conversation with George Martin about her, she’s supposed to be several centuries old, so we always wanted to show her true age and were waiting for the right moment, and this was it for us.”

3. Co-creators have a knack of dropping hints

According to this article, the show runners have a knack of dropping hints throughout the series that only become evident later in the show.

Which theory do you believe in? Let us know in the comments.

Stay updated with the latest Game of Thrones fan theories around the world!
11shares