In Game of Thrones Season 6, we saw that the showrunners finally confirmed the R+L=J theory. But while the Tower of Joy scene was being shown, there was a minute detail that might not have been noticed by many.

Before we delve into the details, first let us see what we know about the prophecy of Azor Ahai.

Azor Ahai is the hero who supposedly saved people from the White Walkers thousands of years ago. He was the chosen one to fight against the darkness. To fight the darkness, he was supposed to forge a hero’s sword. After two failed attempts at forging a sword, he knew what he must do to finish the sword. He had to temper the sword with the blood of his beloved wife, Nissa Nissa. That was hard, but still he did it. He, with a heavy heart, drove his sword into her heart, creating Lightbringer, the Red Sword of Heroes.

The prophecy goes onto say that the Azor Ahai is to be reborn again when the “red star bleeds”. It is said that Azor Ahai will once again fight the Others and if he fails, everyone fails with him.

And guess what, Season 6 Finale might just have hinted who Azor Ahai is.

In episode 10 of Season 6, we saw Ned Stark entering the Tower of Joy to find Lyanna Stark covered in blood. While attending to her, he kept the sword he was carrying at the foot of the bed. Many have pointed out that it is Arthur Dayne’s sword – Dawn. Dawn, according to the books, is said to be made from a metal forged from the heart of a fallen star. If the sword in the scene above is actually Dawn, this might just fulfil the part about Azor Ahai being reborn when the “red star bleeds”. And as can be seen from the shot above, Dawn (“red star”) is covered in blood (“bleeding”).

But Azor Ahai would still need a Lightbringer to fight the darkness and for that he needs to temper his sword with the blood of his beloved. As far as we remember, Jon Snow’s love, Ygritte, was killed with an arrow, not a sword. Then how can he sacrifice her to temper the sword?

New evidence suggests that Jon Snow’s Lightbringer is not some sword, it is the Night’s Watch!

Let us take a close look at the oath of the Night’s Watch.

Night gathers, and now my watch begins. It shall not end until my death. I shall take no wife, hold no lands, father no children. I shall wear no crowns and win no glory. I shall live and die at my post. I am the sword in the darkness. I am the watcher on the walls. I am the fire that burns against the cold, the light that brings the dawn, the horn that wakes the sleepers, the shield that guards the realms of men. I pledge my life and honor to the Night’s Watch, for this night and all the nights to come.

I am the sword in the darkness.

I am the fire that burns against the cold, the light that brings the dawn..

The hint was hidden right under our noses. Night’s Watch is Jon Snow’s Lightbringer! Though this theory has been around for quite a while now, the Tower of Joy scene adds more substance to it.

So, here is how he is Azor Ahai:

There is more evidence to back the fact that Jon Snow is Azor Ahai. In the books, for example, it is mentioned that Melisandre sees “only snow” when she prays to see Azor Ahai. Moreover, it is said that even death kneels before Azor Ahai. Isn’t this what happened when Jon Snow came back from the dead? 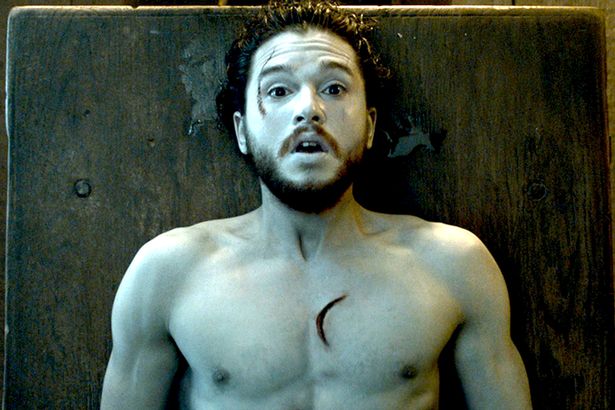 Well, the Tower of Joy scene could be just another camera shot but don’t you think it is too big a coincidence? Game of Thrones has a history of leaving small hints sprinkled throughout the series. We are very much convinced that he is Azor Ahai, what do you guys think?

Stay updated with the latest Game of Thrones fan theories around the world!
15shares